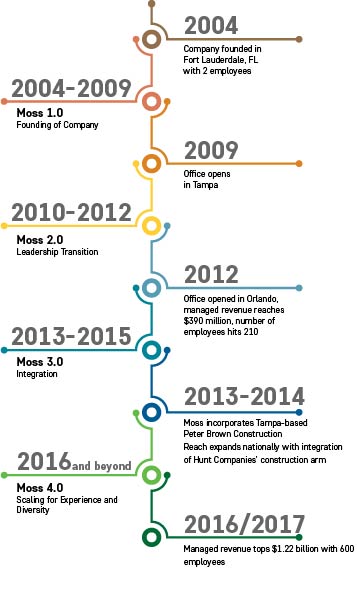 Moss, a privately held construction firm, was founded in Fort Lauderdale, Florida in 2004 with only 2 employees. Over the next several years Moss continued to grow its business in South Florida. With the downturn of the construction industry in 2008/2009, diversified and a decision was made to expand to other locations where executive management had previous business relationships. As a result of the expansion, Moss’ managed revenue reached $390 million with 210 employees. In 2013, Moss acquired the operations of Peter R. Brown Construction. In 2014, Moss nationally extended its geographic reach with the integration of Hunt Companies’ construction arm. With popular construction projects under its belt such as the Miami Marlins Baseball Stadium and Margaritaville Hotel in St. Thomas VI, Moss’ revenue increased to $1.2 billion by the end of 2016.  In the last quarter of 2017, Moss announced the opening of its Dallas Fort Worth office in anticipation of celebrating the grand opening in March of 2018. Today Moss has more than $5.8 billion in managed revenue, more than 600 employees and is ranked one of Fortune’s 2017/2018 Top 100 Medium Companies to Work For.